Payment of Monthly Honorarium to Religious Workers by Govt of AP- Will it Stand Judicial Scrutiny?

“ The state is yet to show any concern towards Hindu archakas rendering their services in temples without any income. On the contrary, the state is meddling with Hindu religious institutions through legislation and administrative actions by arbitrarily fixing the remuneration of Archakas, grading of temples, appointing Executive Officers, interfering in dharmic rituals of temples, disposing off temple assets etc.,”

The Government of Andhra Pradesh has issued orders vide GENERAL ADMINISTRATION (SC.I) DEPARTMENT G.O.MS.No. 52 Dated: 14-05-2021, enhancing financial support to the religious workers in places of worship of two important religious communities of the State viz., Hindus, Muslims. In the case of Christians, it is a new scheme. It leaves out three other minorities- Sikhs, Jains and Buddhists.

The present G.O cites “ensuring religious harmony” in the state as the main objective of payment of monthly honorarium to religious workers of different religions. The G.O. further mentions extension of payment to functionaries working in churches is similar to the support being given to the Archakas working in temples and Imams/Muezzins working in mosques. However, this is a false comparison as the G.O. very clearly states that the quantum of payment to Archakas is based on grade of the temple, which in turn depends upon income generated by the temple. It clearly means that Hindu temple archakas are NOT paid out of the public exchequer.

The Scheme for Payment of Honorarium to Imams and Muezzins of Mosques in Andhra Pradesh commenced in June 2016. The G.O. mentions that:

The latest order marks the beginning of state funding of religious workers in Andhra Pradesh. Promoting communal harmony was not the objective stated at in 2016. The new G.O. not only increased the quantum of payment for Muslim religious workers but also introduced payment of monthly honorarium for Christian religious workers. But by including the enhancement of honorarium for Hindu archakas in this G.O., an impression is sought to be given out that even they are being paid out of state exchequer, which is factually incorrect. The state is yet to show any concern towards Hindu archakas rendering their services in temples without any income. On the contrary, the state is meddling with Hindu religious institutions through legislation and administrative actions by arbitrarily fixing the remuneration of Archakas, grading of temples, appointing Executive Officers, interfering in dharmic rituals of temples, disposing off temple assets etc.,

CAN PUBLIC FUNDS BE USED FOR PAYMENT TO RELIGIOUS WORKERS?

This raises the larger question whether the public money can be used to pay individuals of a particular religion with the purported objective of ensuring communal harmony?

In 2012, the Government of West Bengal issued instructions for payment of monthly honorarium to Imams in mosques. The decision was challenged in Calcutta High court (W.P. No. 358 of 2012) and the decision of the government was quashed. The highlight of the judgement are:

2) The State Government by providing funds for making payment of honorarium to the Imams and Muezzins has acted in clear violation of the provisions enshrined under Article 14 and 15 (1) of the Constitution of India.

3) No exercise has been made by the Competent Authority of the State Government to ascertain the financial condition of various other members of the Muslim community as well as members of other religious communities before taking the decision for issuing the impugned memorandum.

4) The public purpose mentioned in Article 282 cannot be a purpose which offends the provisions of Article 14 and 15 (1) of the Constitution of India.

5) Imams and/or Muezzins are few individuals of the Muslim community and attached with the mosques. Decision to provide honorarium to the said individuals cannot serve the general interest of the community as a whole.

8) Hon'ble Supreme Court in the case of Sri Divi Kodandarama Saram & Ors. Vs. State of A. P. & Ors., reported in 1997 (6) SCC 189 considered the payment of salary to 'Archaka' of Hindu Temple. In the aforesaid decision, Hon'ble Supreme Court made it clear that public fund cannot be utilised for the purpose of making payment of Archakas and trust looking after the temple was advised to collect donation from the public to defray the expenses.

Thus it is very clear that payment to religious workers from public funds has been held to be “squandering of public money”. The objective cited in the Govt. of AP G.O. i.e., “communal harmony” also fails to stand judicial scrutiny in view of observation (5) cited in above judgement. The judges have clearly held that payment too few individuals of a particular community does not serve the interests of all members of that community, leave alone serving promotion of inter-faith communal harmony.

The judgement also referred to a judgement of Hon’ble Supreme Court in matter of payment of honorarium to Imams. Hon’ble court clarified that the scheme formulated by the SC was for payment of a uniform scale of salary to Imams from income of the respective state Wakf Boards and not public funds.

“The Hon'ble Supreme Court in the aforesaid decision never directed the State Government or the Govt. of India to take the responsibility for making payment to the Imams who are admittedly performing the duty of leading the community prayer in the mosques.

June 2021, the Kerala High Court on Tuesday asked the state government, why they were financing a religious activity while considering a petition against the former’s decision to provide pension to madrasa teachers in the state. The order was issued on a petition filed seeking to quash the Kerala Madrasa Teachers’ Welfare Fund Act, 2019, which is passed for disbursing pension and other benefits to madrasa teachers.

This is an ongoing case but it is pertinent to note that courts have consistently upheld the view that governments cannot finance any religious activity and such actions are unconstitutional. Article 46 of the Directive Principles of State Policy enshrined in the Constitution of India call upon the state to “promote with special care the educational and economic interests of the weaker sections of the people”.

Anomalies observed in recent payment of honorarium to religious workers in Andhra Pradesh:

In May, 2020, the Government of Andhra Pradesh made a one-time payment to religious workers who are facing hardship and distress of various religious institutions, as a measure of relief arising out of break out of COVID-19 Pandemic. A sum of Rs.33.92 crores was sanctioned out of Disaster Relief funds. The ratio of religious workers to population of that religion as per 2011 was highly irrational. While Christians constituted 1.39 % of the population of AP, Christian religious workers received 43.99 % of total amount paid out. Every 24th Christian in the state is a religious worker, if we go by 2011 census figures for the state of AP. 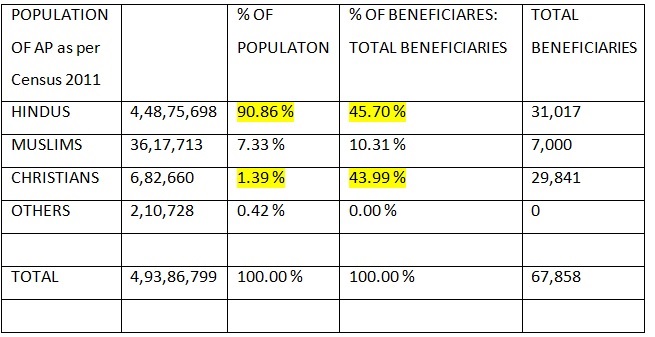 In addition, data obtained through RTI queries on the details of Christian religious workers who were paid honorarium showed that 60 % of Christian pastors in the sample were holding Hindu community certificates. This raised many questions and exposed lack of strict scrutiny in the processing of applications for sanction of honorarium to religious workers.

RELIGIOUS COMPOSITION OF CHRISTIAN PASTORS WHO RECEIVED ONE TIME HONARARIUM FROM GOVT. OF AP 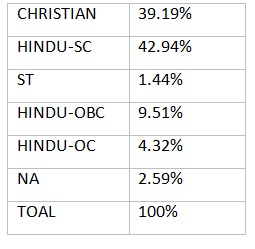 The present G.O. has laid out 3 eligibility criteria that have to be fulfilled by the applicants to be considered under the scheme.

(a) Church should be registered under the Societies Act;

(b) land should be registered in the name of Church;

(c) institution should not have any other source of income.

Thus it will be interesting to see whether the present scheme, as outlined above, will stand judicial scrutiny if and when challenged in a court of law. Also, it will be keenly observed whether the government will heed to the concerns raised by Christian community and relax existing eligibility criteria.

Pak Bill on Jadhav has "shortcomings" and is a clear "breach" of basic tenets, says India

New Delhi: India on Thursday, June 17, said that the Pakistani municipal courts cannot be the arbiter on matters of Kulbhushan Jadhav and international law, and said it is high time for Islamabad to take "appropriate steps" to address the shortcomings in the ICJ (Review and Re-consideration) Bill.  "The Bill codifies the earlier Ordinance frankly with all its shortcomings. It does not create machinery to facilitate effective review and reconsideration of Jadhav's case ...